Together, we can advance the right to essential health care and bodily autonomy in the year ahead. Give Today

Methodology for Calculating the U.S. Share of the Cost of Addressing the Unmet Need for Contraception in Low- and Middle-Income Countries

The calculation of the U.S. share of the total funding resources required to meet the current unmet need for modern contraception of women in low- and middle-income countries (LMICs) is derived from a methodologically rigorous analysis done by the Guttmacher Institute called “Adding It Up: Investing in Reproductive and Sexual Health.”

According to the July 2020 analysis, satisfying the current unmet need for modern contraception of 218 million women of reproductive age in LMICs who want to avoid pregnancy but are not using a modern contraceptive method would cost a total of $12.6 billion annually, with the total U.S. share equaling $1.736 billion. 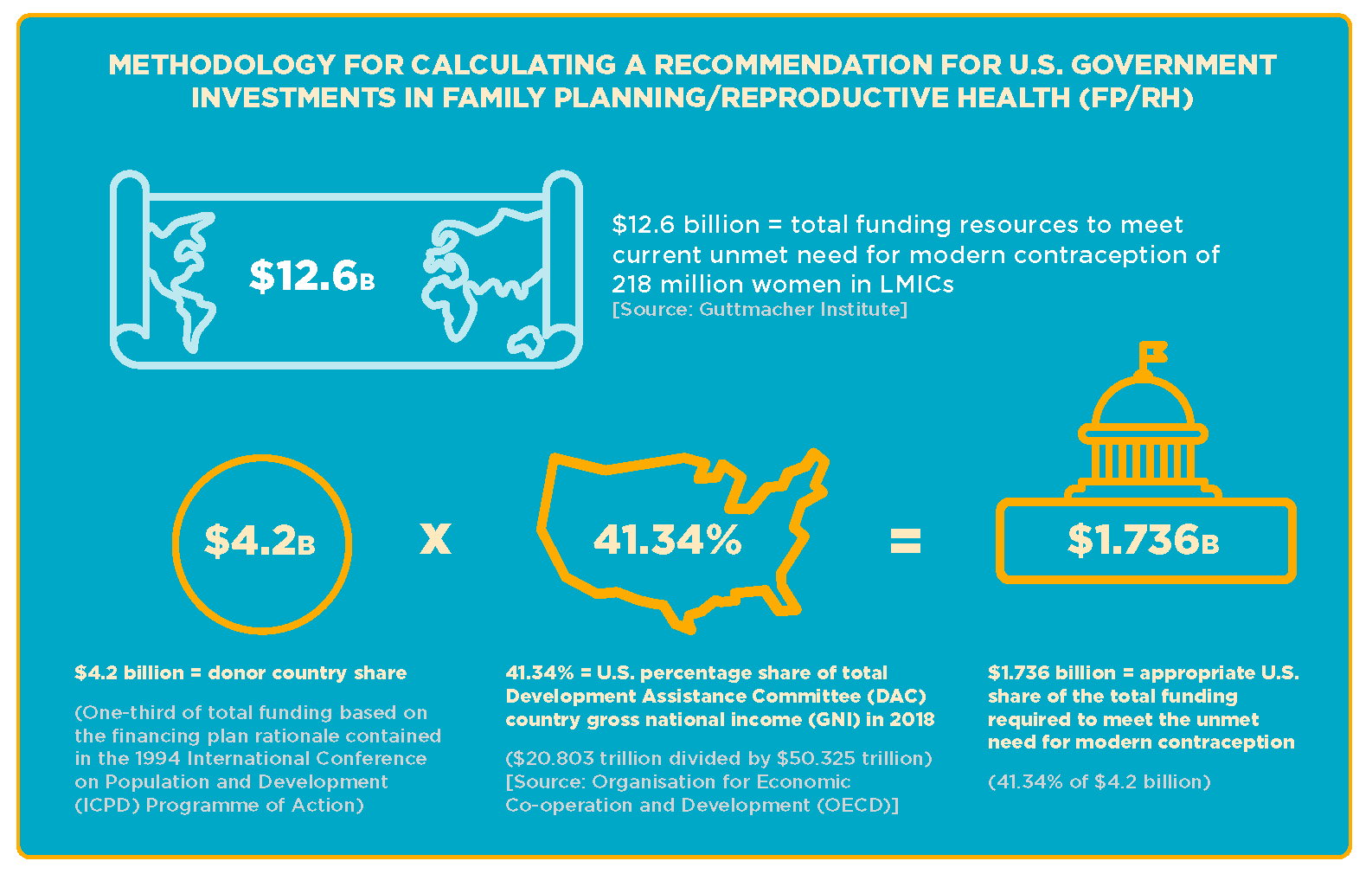 At the 1994 ICPD in Cairo, 179 U.N. member states agreed by consensus — purportedly for the first time during an international conference — on a costed implementation plan designed to achieve the goal of significantly expanding access to reproductive health care, including family planning, through 2015. The ICPD Programme of Action called for two-thirds of the annual cost to be borne by recipient countries and the remaining one-third by donor nations like the United States. Using the agreed-upon ICPD burden-sharing rationale, donor nations would be expected to contribute one-third of the $12.6 billion total current cost — or $4.2 billion.

The most equitable formula for allocating the relative shares of the $4.2 billion contribution to meeting the $12.6 billion annual cost among donor countries should be based on each nation’s wealth relative to each other. The membership of the DAC of the OECD is composed of all the major industrial nations that provide official development assistance to LMICs, amounting to nearly $152 billion in 2019. GNI is the internationally accepted indicator for measuring national wealth. Under this measurement, the U.S. economy represented over 41% of total donor nation GNI in 2018, the latest year available — U.S. GNI of $20.8 trillion divided by total OECD-DAC GNI of $50.3 trillion.

The final computation produces a recommendation of $1.736 billion for fiscal year (FY) 2022 as the appropriate U.S. share of the total annual funding from all sources required to meet the current unmet need for modern contraception of 218 million women in LMICs — 41.34% of $4.2 billion. Embedded within the $1.736 billion target is an allocation of $116 million for a U.S. contribution to the United Nations Population Fund (UNFPA), the only intergovernmental institution with an explicit mandate to address the reproductive health needs of women and men worldwide.

International FP/RH advocates in Washington, D.C. are able to furnish to legislators and executive branch policymakers a defensible, evidence-based estimate of the appropriate U.S. government share of the cost of meeting the unmet need for modern contraception of 218 million women in LMICs.

To put the size of the recommendation in perspective, if $1.736 billion were to be appropriated by Congress for FY 2022, that level of spending would require a near tripling (2.9 times) of the current FY 2021 enacted level of $607.5 million. Appropriated levels for international FP/RH programs have plateaued at just over $600 million for the last 11 fiscal years. However, the historic record for highest congressional appropriations for U.S. government overseas FP/RH programs in constant dollars, set in FY 1995, would amount to over a billion dollars today — $1.018 billion — when adjusted for inflation.

Strategic investments in sexual and reproductive health saves lives. The Guttmacher Institute’s analysis found that meeting the current unmet need for modern contraception in LMICs countries would result in a decline of about two-thirds in unintended pregnancies (from the current 111 million to 35 million per year), unplanned births (from 30 million to nine million per year) and unsafe abortions (from 35 million to 10 million per year). Furthermore, for every additional $1 spent on contraceptive care, $3 is saved on maternal and newborn care because of declines in the number of unintended pregnancies.

A calculation of the appropriate U.S. share of the global investment required to satisfy the current unmet need for modern contraception of women in LMICs, derived from a methodologically sound estimate of the total annual cost to achieve that goal and based on a reasonable burden-sharing rationale for contributions to the effort by donor and recipient countries, helps inform policymakers’ priority setting and decision-making by providing a solid, evidence-based estimate of what the U.S. government should be investing in contraceptive availability and use.