The Turnaway Study: Ten Years, a Thousand Women, and the Consequences of Having — or Being Denied — an Abortion 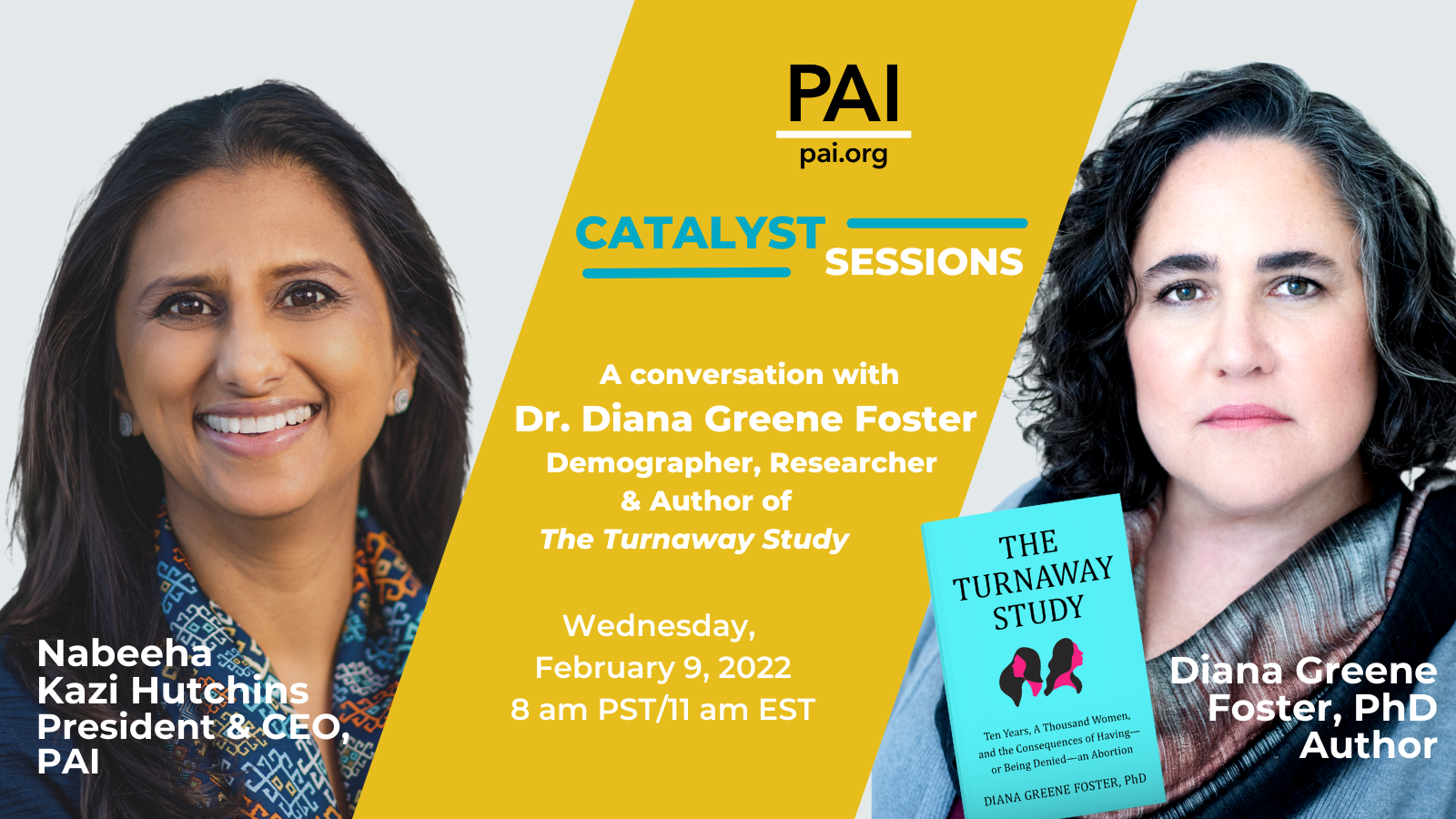 With access to abortion being dismantled across the United States, the impact of long-standing, regressive U.S. policies that diminish access to sexual and reproductive health care abroad and the long-term effects on the lives of women who are denied care, our visit with Dr. Foster was both timely and urgent.

The first study to rigorously examine the effects of receiving versus being denied a wanted abortion on women and their children, The Turnaway Study captures data from nearly 1,000 women seeking abortion from 30 facilities across the United States, with researchers conducting interviews over five years.

The long-term study shows that when abortion is denied, women are harmed.

Dr. Foster courageously opened our discussion with her own personal history of unintended pregnancy with the early experiences of her grandmothers. She then shared reflections and takeaways from her book, The Turnaway Study, noting data and calls to action that advocates, both in the United States and abroad, can take forward. In addition, we discussed learnings from countries — such as Argentina, South Korea and Mexico — that have legalized abortion, the opportunity for greater collaboration between sexual and reproductive health advocates and researchers and other results that will further fuel the work of advocates.

“In the United States, we’ve had a narrative that abortion hurts women. We find that abortion is actually associated with improved physical health, financial security, aspirational plans and the ability to take care of existing and future children compared to carrying an unwanted pregnancy to term.”

“There is a really complicated interaction of mental health and family planning, and it isn’t one that is easily solved by governments making decisions that don’t allow individuals to make their own decisions. Any ban (on abortion) at a certain week is going to disproportionately hurt people who are vulnerable, including those with mental health problems.”

There is an opportunity for greater collaboration between researchers and the advocacy community. Dr. Foster noted the importance of working in partnership as advocates are on the front lines and cannot only amplify data and insights, but can also inform the research community of the necessary knowledge gaps to fill. The opportunity exists for a strong and more deliberate network where abortion and sexual and reproductive health and rights advocates sit at the table together to inform research priorities, insights and evidence needs.

“We need to open this up and allow for more dialogue in both directions and not just expect the research to trickle down to the field, but for the field to inform what research is being done.”

Ongoing research for The Turnaway Study in five other countries, where abortion is legal, shows that despite legalization, far too many people are still unable to access abortion care. Noting the example of Nepal, where abortion is legal, Dr. Foster shared that access is still limited. It reinforces that policy change is important, but investments in community engagement along with systems and awareness about services should be sustained. Dr. Foster also noted the importance and benefit of having abortion data and evidence from a range of countries and the mechanisms to share that data and foster global conversations as it informs both U.S. and international advocacy.

“Dr. Mahesh Puri (co-director of the Center for Research on Environment, Health and Population Activities (CREHPA) in Nepal) is leading a study of women seeking abortion from across the entire country, following both those who received and those who were denied abortions. Their (Nepal’s) abortion law is one of the world’s best — abortion is available up to 12 weeks at no cost at public facilities and then after liberal reasons after 12 weeks for people with mental health, physical health and other conditions. And yet, many abortions happen outside the legal context. So even where the laws are all right, the systems in place are not yet conducive to everybody accessing care.”

Dr. Foster also shared the following available with French and Spanish subtitles, that centers on the experiences of women who have been denied an abortion. Hear the fascinating discussion with Dr. Foster and her reading a small portion of her book toward the end, by watching the Catalyst Session recording below.

Dr. Diana Greene Foster is a professor at the University of California, San Francisco, in the Department of Obstetrics, Gynecology and Reproductive Sciences and the director of research at Advancing New Standards in Reproductive Health (ANSIRH). An internationally recognized expert on women’s experiences with contraception and abortion, she is the principal investigator of the Turnaway Study.

PAI champions policies that put women, youth and at-risk communities in charge of their sexual and reproductive health and rights. We work with policymakers in Washington, D.C., and our network of more than 120 funded partners across 36 countries to remove roadblocks to access sexual and reproductive health services and support. For nearly six decades, PAI has helped communities succeed by upholding their basic rights.